You have made us for yourself, and our hearts are restless, until they can find rest in you. ~Augustine

I am very affected by climate changes. When it’s sunny and warm, I am happy and full of life. When it is cold and grey, I am lethargic and down. Actually, I get very depressed.

This poem was birthed out of deep depression and great need. It reminds me of what King David wrote in the Psalms; “Why are you downcast, O my soul? Why so disturbed within me?”

He spoke to his own soul; so I did the same.  I went to the one that is higher than I and poured out my heart. And you know what? I found rest, comfort and reassurance. My mind was no longer playing tricks on me. I decided I was not going to be a prisoner to the screams in my mind and the tightness in my heart. That doesn’t mean that negative feelings never come back, but they can’t control me.

How do you deal with negative feelings?

Finally, after 2 1/2 months of not posting a ‘Color me’ girl, the purple one is done.

Purple is the color of royalty. Maybe it’s because purple robes were worn by royalty in the past and the rare occurrence of purple in nature made it one of the most expensive color dyes to create (source – Bourn Creative).

My treasures are not things like gold and jewels. I could care less about them. My treasures are riches that can’t be bought. Divine and simple. Obtained without stress or anxiety. Deeply fulfilling and eternal.

How about you? What do you consider to be treasure? Are you deeply satisfied? Do you consider yourself wealthy and powerful? And how about free?

Mercy: compassion or forgiveness shown toward someone whom it is within one’s power to punish or harm. —Google

Have you ever been shown mercy? I have. Over and over and over again. I’m so thankful for mercy, because I know that without it, I would be living in fear. Who wants to live in fear? To me, living in mercy means living in freedom. There’s a reason to wake up in the morning. A reason to smile. A reason to dance.

Have you ever been shown mercy? Share your story…

Just a quick note to let you all know that I’m back from my break. I was off for just over a month with the goal of accomplishing a bunch of things that I needed to get done. I was successful with a couple, but thanks to breaking my foot, I was unable to get everything done. It’s great to be back though. Looking forward to reading your blogs and catching up.

Childhood is a very important time in a person’s life. Those who raise children can either make or break them. If broken during these fragile, formative years, the outcome can be drastic. It can take a whole lifetime to heal, and oftentimes there are wounds that scar until death.

Do you agree with the above?

Do you think that allowing yourself to be enslaved to someone kind of goes against the idea of freedom?

As a Christian, I believe that freedom comes from living within boundaries that were made for my protection. I used to think Christians lived such boring lives. I also used to think that they were just religious freaks, following a bunch of rules, and having no fun. Little did I know (at the time) that I was the one that was imprisoned. I believed a lie.

I believe I have freedom now. Freedom to be all that I was created to be. Freedom to say no to that which will harm me. Freedom to live within healthy and safe boundaries. Ahhhhhhhhhhh.

What does ‘freedom’ mean to you? Do you believe that boundaries are needed to truly be free?

The cinquain poetry form is a 5-line, unrhymed poem. It contains 22 syllables and each line has a different syllable count:

The photo was taken in Ouro Preto-MG, Brasil.

Coram Deo is a latin expression and means, “before the face of God”.  It implies that my entire life is constantly lived before Him. It takes away the idea of the separation of the secular and the sacred.

The word secular refers to a state that is worldly rather than spiritual and is not related either to religion, spiritual matters or to a religious body, for instance secular music or secular buildings (source).  I would like to add that secular activities would include education, work, taking a shower, eating a meal with my family, chores around the house, etc.

Sacred means to be devoted or dedicated to a deity or to some religious purpose; consecrated (source).  In other words, church attendance, worship services, prayer, outward religious acts, etc.

I don’t consider myself to be religious, but someone who has a relationship with her creator that is intimate, vibrant and real.  As a Christian, I believe that the way to God is through relationship, and that we were created with that purpose – Relationship.

No one wants to have a relationship that is forced, fake, dishonest or uncommitted.  True Christianity is exactly the opposite of that.  It’s not hypocritical, nor is it a following of a set of rules.

It is living in freedom to be all that one was created to be.  It is having a way to be forgiven and restored.  It is Coram Deo.

How do you see God?  Do you believe that He values relationship or rules?  And if you like, please let me know of what you think of the song.   How does it speak to you?

The above artwork is the result of week four of the class “Kingdom Come” that I’ve been doing. I decided to embed my song, Coram Deo in it, because I believe the two fuse together nicely.

I’m super excited. I have joined a faith-based arts community on-line, because I really like mixed-media art and want to learn how to do it. I also have this crazy urge to just create, so this gives me the opportunity to learn and grow. The above picture is the first I’ve done since elementary school I think. It is the first piece I’ve done of a five-week course offered within this online community. Once I was finished, I was inspired to write the poem.

Ok, I know it’s no Picasso, but there is really something exhilarating about creating something yourself and seeing the end product.

Do you like to create? What are your creative outlets?

Can I just say this one thing quickly? –I love this painting. I came across it when I was looking through an online art gallery of a new faith inspired creative community called, “His Kingdom Come” that I just joined. When I saw it, the inspiration hit. That’s how this little playful poem was born. I shared it with Shonna and she asked if she could digitally put it into her painting and I agreed (of course). For the past little while I’ve been wanting to get artsy, and I especially love mixed media and whimsical art. With the encouragement of people like Lorrie, I’ve decided to go ahead and seek out ways to do this. To my great delight (happy dance here) Shonna is working on starting up some classes for beginners (which I am). Yeah!

So, I always like to leave a little question (or two or four) here for readers. Do you ever get into a playful mood? What do you like to play when this mood strikes? There’s a little child within each of us, don’t you think? 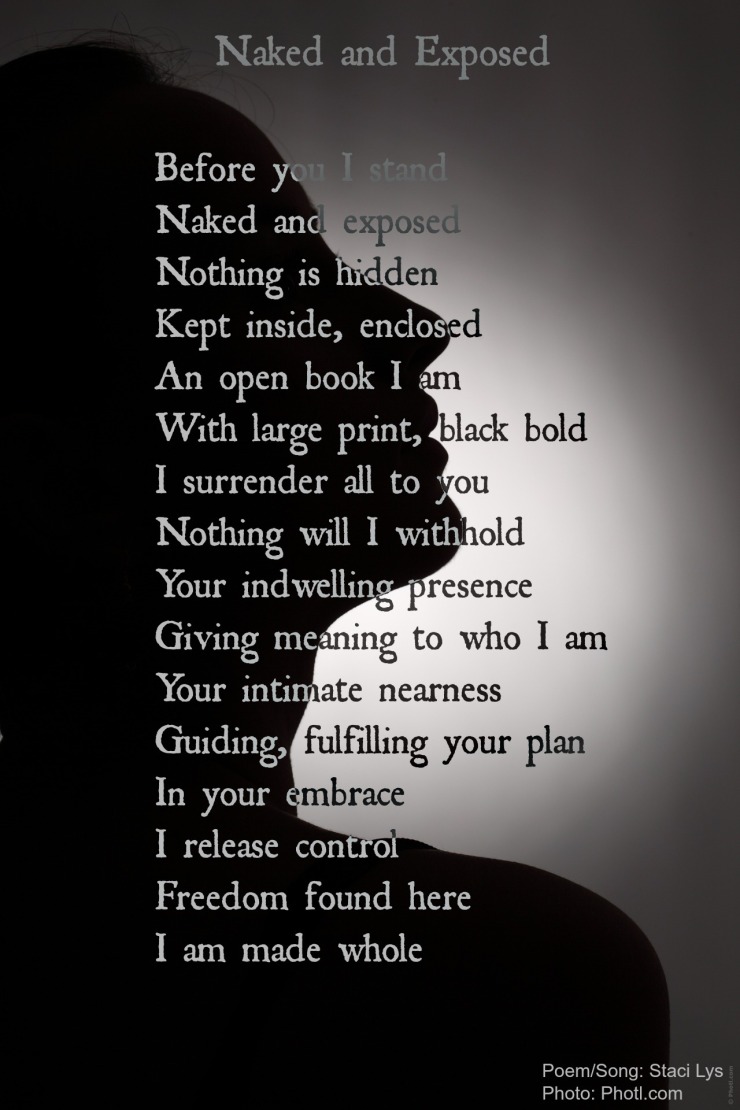 Are you a private person? Do you like to keep some things to yourself?

I used to be very open with others. In fact, I used to think of myself as somewhat of an open book. I was also younger, inexperienced, and maybe a little less wiser. I remember though, when I first made a decision to believe in God and to live for Him, I began to have a much stronger conscience. I would feel anxiety at times because I felt as though there were certain things I just may like to hide from Him. Things that I didn’t want him to know. Maybe thoughts that weren’t always the purest and morally correct. One day, however, I was walking home from school and it suddenly dawned on me. I can’t hide a single thing from my creator. He knows all of my thoughts. All of my actions. All of the motives of my heart. He even knows the words I’m going to speak before they reach my lips. Then I realized, that in Him knowing all, and that He still accepts me just as I am, there was great freedom and comfort in that. All the wrong that I had ever done, and would ever do, could be wiped away, simply because of His amazing mercy and grace.

How could I not surrender my all to Him.

Now back to you. Are you a private person or are you an open book? Do you ever wonder, or think about your motives, and if they are ever seen or known? 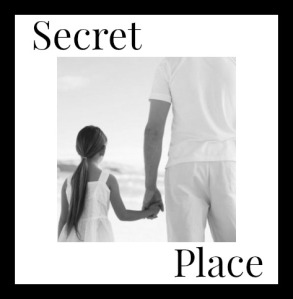 I can tell him all my secrets
That I share with almost no one else
I can be open and honest, without fear
Cause he knows the deepest needs that are in my heart

I can be, I can be simple with him
That’s what he wants, that I be real with him
And I, I would have it no other way
Then be myself, be who I really am with him

I can tell him all my secrets
That I share with almost no one else
I can be open and honest, without fear
Cause he knows the deepest needs that are in my heart

Is there anyone that you can be totally open and honest with?  Anybody that you can share your deepest thoughts and feelings with, and know that you won’t be judged? I do.

Now, I don’t want to sound like a religious freak here, but I’m going to go out on a limb. This song was written about the quiet times I have alone with God.  Being a Christian, I believe in Jesus and that in him I live, move and have my being.  That said, it is very important to me to spend quality time with Him. To have relationship.  Because ultimately, I believe that is why God created mankind.  For relationship.  I love how Sarah Young puts it in her book, ‘Jesus Calling’, “He and I are intertwined in an intimacy involving every fibre of my being.” I love this quote.

Truth be told, this isn’t my greatest recording.  At times I go flat and it sounds like I’m tired (I did have a baby at the time), but this song was written about these times I have alone with God.  He is my safe place. He is where I can unload all of my crap and know I’ll be understood.

So, back to you. I’m interested to know. Is there anyone you can be totally open and honest with? How do you unload your crap? Do you have a secret place where you go to find peace and unload your burdens?