Foxes have been considered pests, sly, cunning and clever.

In Australia they are seen as an invasive species. They have caused many problems in the country, impacting the environment and agriculture, even causing many species to become extinct because of their predation.
In ancient Israel, little foxes were considered potential threats that spoil things of value. Even in the romance book of the ‘Song of Solomon’ the woman says to her beloved, “Catch for us the foxes, the little foxes that ruin the vineyards, our vineyards that are in bloom.”
Even Jesus called the monarch a fox, a negative term to imply he was a cunning and sly individual.
Foxes are little. They walk around on their tip-toes, as if sneaking around. They dig through gardens and scatter weeds.
It’s the same with the little things in our lives that we think don’t have any major impact. Little white lies, negative thoughts, cruddy attitudes, bitterness…
I, for one, don’t want to accept the lies. Truth is my dagger, and I know that when light is present, darkness must flee.
What are your little foxes?

Do you think of life as a journey? I do. Looking back, I can easily see that my life has been a journey. The experiences I’ve had. The ups and downs. The joys and pains. The good decisions and the bad, as well as the consequences that came with them. I’ve suffered a lot, and I’ve experienced great joy and peace. I’ve thought a lot and grappled with my world-view. God willing, I still have a good number of years ahead of me, so I know that this journey continues. I’m very thankful that I don’t walk it alone, and that I am constantly learning and growing. I know that the phase, or season that I am currently living will come to an end, and mesh into the beginning of the next one. And when my life comes to an end… that’s just the beginning to a whole new phase.

Do you think of your life as a journey? Have you considered how your experiences and choices have shaped you into who you are today?

The above poem is a Monotetra, which is a form that is made up of four lines in a stanza, each line being eight syllables long and each line rhyming. The last line in a stanza is a couplet of four syllables repeated. This is also in response to “The Reverie Journal’s weekly prompt, which this is week was “Quiet Journey”.

Have you ever felt pink? I have. I know that most guys reading this will not be able to relate (sorry guys), but I bet you guys have appreciated it when your girlfriend or wife has been feeling pink.

Pink is a special color to feel. It’s the color that says, “Ahhhhh, I think I’ll go down to the outdoor market to buy some flowers today. Maybe daisies or gerberas to display on the dining room table.

It’s the color that comes in that sweet-smelling perfume. Maybe a floral or a vanilla bean.

It’s the color that comes in that pretty little sun dress that one wears on a late spring day. Maybe out to the park, or on an early evening stroll.

It’s the color of little girls dancing in their first ballet, or playing indoors on a rainy day.

What comes to mind when you think of the color pink? How does pink feel to you?

This is the third part of a nine-part poem and mixed media project I am working on. The ‘Color Me’ poem I wrote just over a year ago and can be read here. I would like to dedicate this post to the lovely Trini. She is the most pink person I know, and I love that about her.

A sprinkling of salt

Darkness flees in His presence

Salt serves to season, preserve and disinfect. Metaphorically, it has symbolized loyalty, fidelity, usefulness and purification throughout history (source).

Light chases away darkness. In fact, darkness is the absence of light.

As a Christian I’m a fan of the Bible, and read it regularly. I meditate on what it says and try to live accordingly. There is this one part that says:

“Remain in Me, as I also remain in you. As the branch cannot bear fruit by itself, unless it remains in the vine, neither can you, unless you remain in Me. I am the vine, you are the branches. He who remains in Me, and I in him, bears much fruit. For without Me you can do nothing.”

And so I present to you this simple art piece and poem. My prayer is that I will bear much fruit. Beautiful fruits of love, joy, peace, patience, kindness, goodness, gentleness, faithfulness and self-control. I know that in and of myself it is impossible. But then again, I guess that’s why these fruits are called, “The fruit of the Spirit”. As I remain in Him and He in me, these fruits are possible to obtain.

Do you believe yourself to be a person full of these fruits? Which area is your greatest struggle? For me it is patience and self-control.

Just a quick note to let you know I will be traveling on Friday and will be gone for about two weeks. I will not have regular access to the internet while I’m gone.

Ahhhhh, it’s so good to be back. I’ve missed blogging. My big move and all the craziness in my life these past few weeks (months actually) have taken a toll on me. I’m back on WordPress now, and hoping to settle into my new normal and routine. Can’t wait to reconnect.

Don’t you love that word, ‘pursuit’? It makes me think of using all of one’s strength in the quest of accomplishing something of importance. The Free Dictionary gives the following definitions:

Being that I’m a Christian, I like to read the Bible. There’s this one passage where a number of Jesus’ followers turned away, because what he was teaching them seemed too tough to swallow. When he asked his closest friends if they were going to leave him too, one said, “…to whom would we go? You have the words of real, eternal life.” That’s a pretty heavy statement, but I believe it.

My pursuit then, will be for Truth. I don’t understand it all, and expect I never will. But when you find something so good, so fulfilling, so meaningful and freeing – it’s something you want to grab on to with both hands and never let go.

Have you ever pursued something? Have you ever grabbed on with both hands and not let go until you’ve attained it? Would love to know your experience hmmmmmm… 🙂

I’m part of an international creative community online called, His Kingdom Come. This is my response for this week’s prompt. 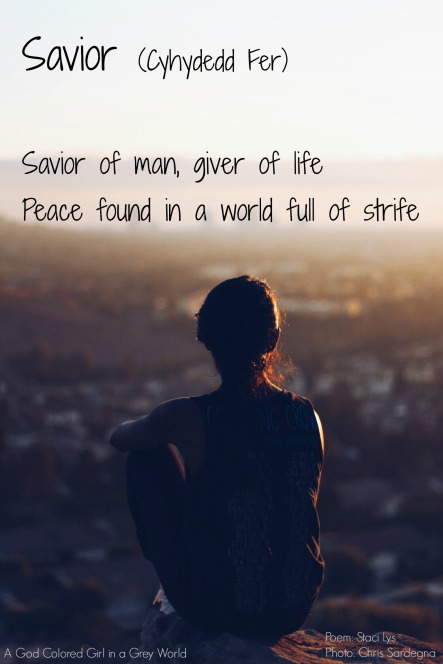 Do you ever feel like the world has lost control? Sometimes I have to wonder where humanity is heading. I know that history hasn’t always proven to be a bed of roses, but it seems to me things are just getting bleaker. Or maybe it’s just because we have access to so much information now.

I am thankful for peace found in the midst of chaos, and for the light in my heart, even though the world seems dark.

What are your thoughts about the world now-a-day? Where do you think humanity is heading? Where do you seek peace in a world full of strife?

What do you like to do in the morning?  Where do you find peace and strength? 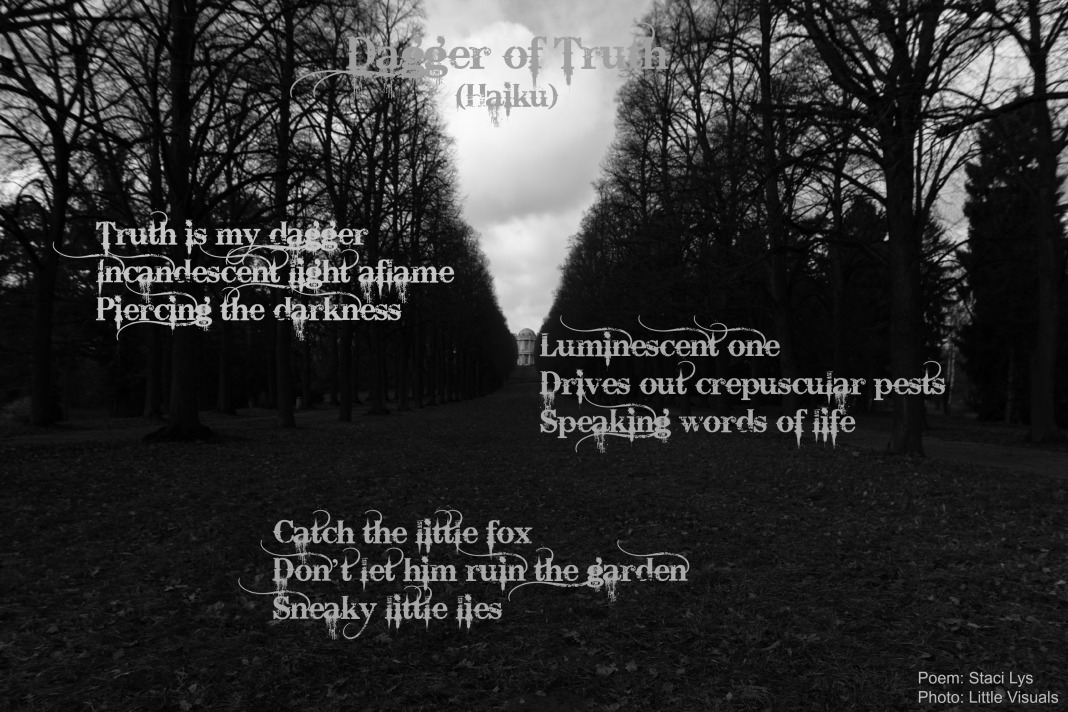 Do you believe in the spirit world? Do you think that there is anything beyond matter, time and space? I do.

I know not everybody believes what I do, nor has had the same type of experiences. We are all individuals. We are all unique. Not one of us has the exact same experience in life.

When I was a child, and all through my adolescent years, I just accepted what was taught to me in school. I didn’t believe in God, nor the spirit world. It wasn’t until I started asking the questions that all humans, at one point or another, ask themselves. How did I get here? What is the meaning of life? What is my purpose in life? Why are people frightened of death? Where am I going when I die? So at the age of 20 I made a decision to believe in God? I had found Truth, or better yet, He had found me.

Over the years though, I’ve had to water that relationship. I didn’t just make a decision and leave it at that. No relationship thrives like that. It takes dedication, commitment, and quality time spent. If I don’t feed my spirit the healthy nutrients it needs, it is very easy to start believing subtle little lies. When that happens, things get dark and I need to run to the light. That’s where I hear words of life again. That’s where I am restored and refreshed again. That’s where I’m safe and sheltered from fear. I need to catch those little foxes before they dig up the garden. Before they scratch away the seeds that were planted for the growth of amazing fruit.

Absolutes obsolete
Buying truth like one does dim sum at kiosks on the street
A little bit of this
A little bit of that
Something fried
Something steamed
Something salty
Something sweet
All to satisfy each craving I have
All to suit my own personal needs
This I don’t like so I’ll leave it alone
But that I adore so it’s coming home
Morality, shmorality
It’s all relative, you see
What may be truth for you
Isn’t truth for me
Really?

What are your thoughts?